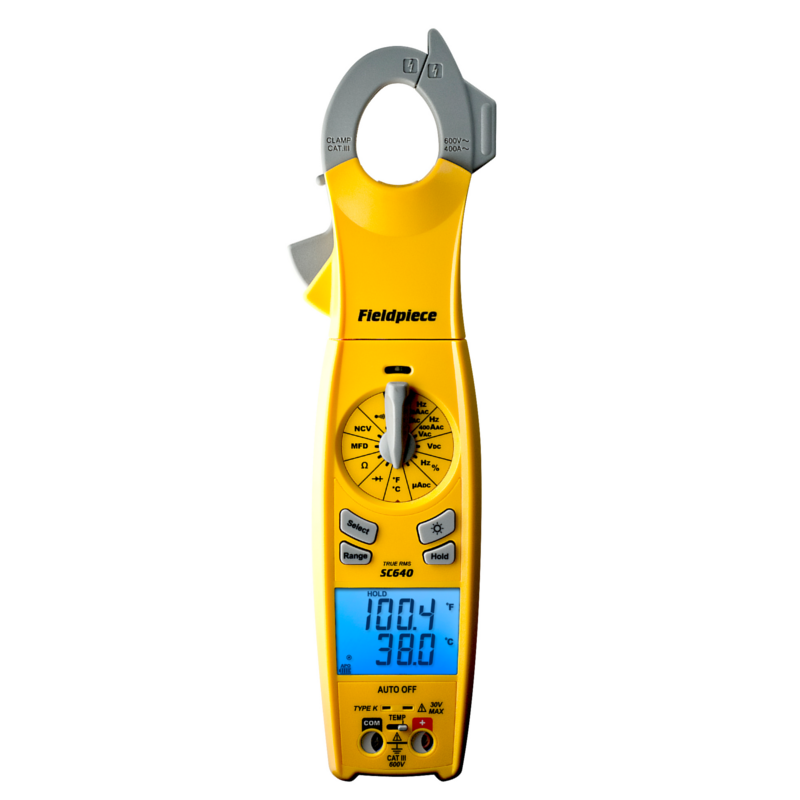 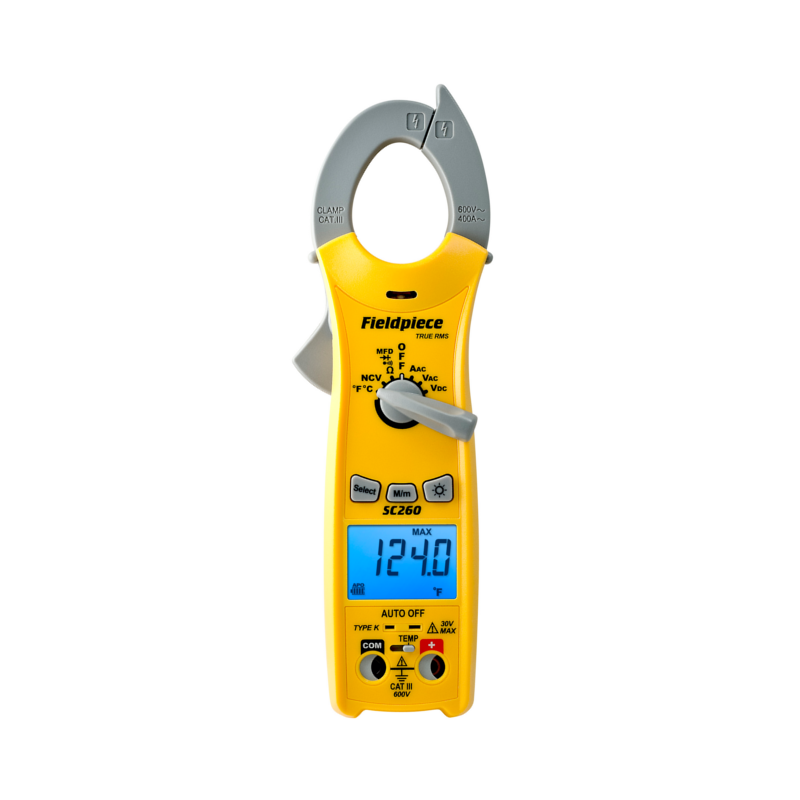 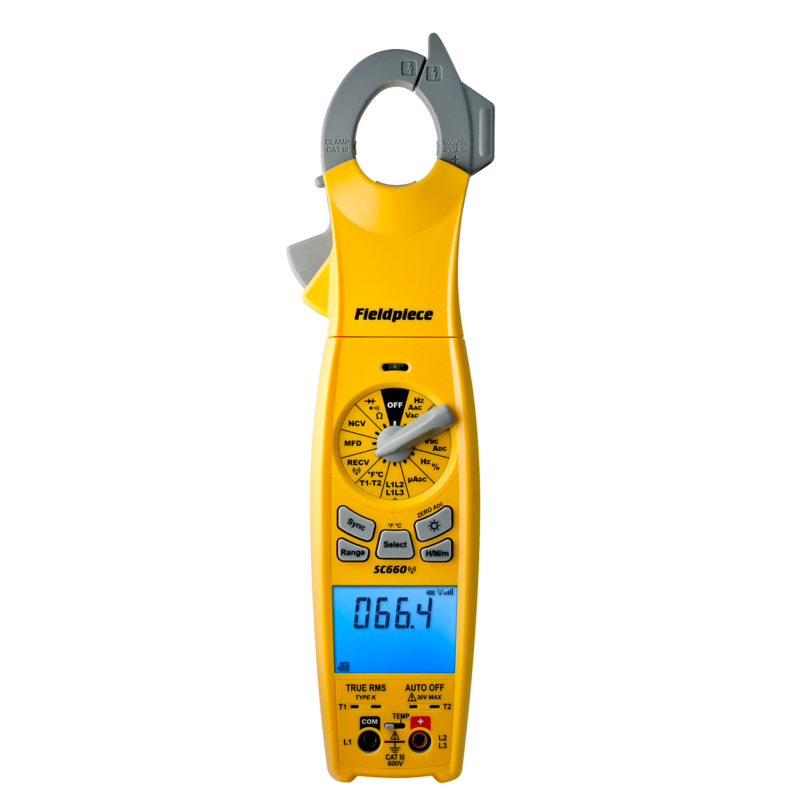 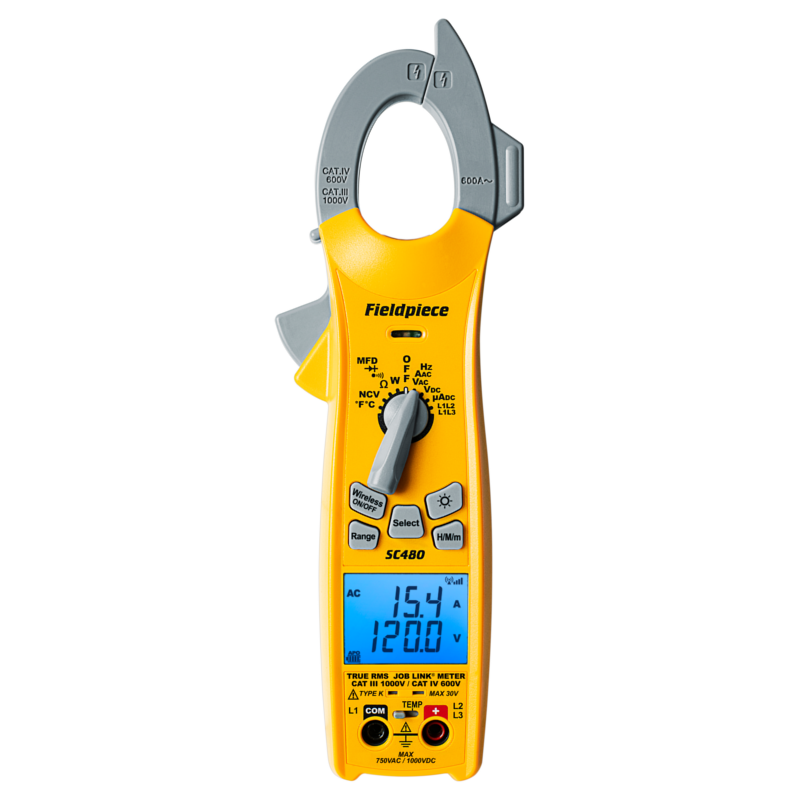 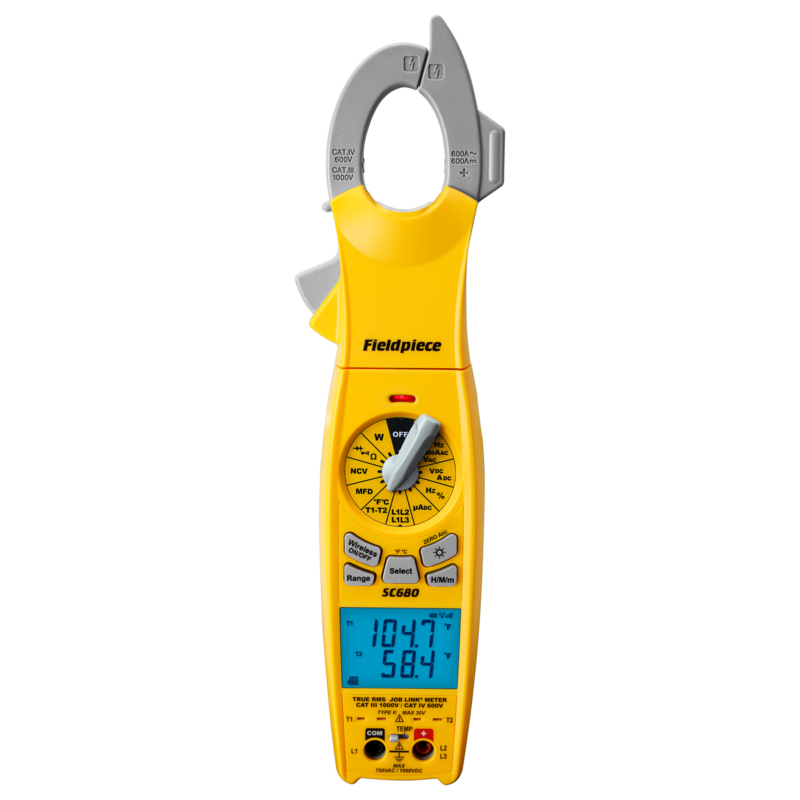 Although typically associated with electricians, a digital clamp meter is a crucial tool for any HVAC technician's bag. While it's not possible to have a complete discussion about electrical issues associated with working in the HVAC/R field, we will take a look here at the most critical meter features needed to work in the HVAC environment. Then we'll look at how the diverse line of Fieldpiece HVAC clamp meters meets those testing needs. To begin, we'll take a brief moment to review some basics of electricity and how it applies to air-conditioning and heating systems. Then we'll take a look at how to use a Fieldpiece clamp meter to test those parameters.

An easy way to think about electricity is to compare it to water. It doesn't function precisely in that way, but it's a helpful way to imagine it so we can easily understand what we are measuring with each parameter on our Fieldpiece clamp meter. Electricity runs through a conductor in a way that is like water running through a pipe. Water pipes have some amount of force, which creates water pressure. With electricity, this force is created by a battery, generator, or another power supply. The "pressure" created and applied to the conductor is what we mean when we talk about voltage. With our HVAC clamp meter, we want to be able to measure voltage to 600V AC and 300V DC. Those ranges should be standard on all specialized clamp meters for HVAC.
The next common parameter we measure with an HVAC clamp Meter is current. While imagining electricity like water in a pipe again, we can say that current is like the rate of flow through that pipe. Incidentally, when you first turn on a device, you'll notice a several-times higher reading of current that quickly stabilizes down to the normal range. This phenomenon is known as inrush current, and the water analogy is helpful in imagining how this happens. More advanced Fieldpiece digital clamp meters can isolate this spiked reading and save it using an Inrush feature. Inrush current measurement is a useful test for checking electrical efficiency in various components. We measure current in Amperage or Amps, and for our Fieldpiece clamp meters, we'll see that they all read at least 400A AC.
The next common parameter that we'll check with our HVAC clamp meter is resistance. Going back to our water metaphor: resistance is anything obstructing the flow of current on the conductor, hence the name. Resistance is measured in ohms, and we call this testing for continuity. If we have continuity, that is, an acceptably low resistance reading, our Fieldpiece compact clamp meter will let us know with an audible beep. This continuity testing is essential for making sure all the electrical components on our HVAC or heating system are functioning correctly. Audible continuity testing is also a fast way to troubleshoot if there seem to be electrical problems. If you have current and voltage present in the system, but some parts aren't working, chances are they are being impeded by too high resistance in a malfunctioning component.
A final important feature on all our Fieldpiece compact clamp meters is testing capacitance. We won't go into tremendous detail about capacitors, as they are a complicated subject. Still, they are a very failure-prone element of an AC system, so we need to be sure that we are equipped to test them when necessary for troubleshooting a malfunctioning system or for preventative maintenance work. To revisit the water analogy once more: capacitors are like a water tower. It stores up the excess pressure and then releases it at a time of high demand. As a reminder, our "water pressure" represents current in an electrical system. So the capacitor will store current and release it when needed, most often when components need to be started. Hence, a failing capacitor will prevent an AC or heating system from starting. Pretty essential to verify that it will function properly! We'll go into a bit of detail below on how to test capacitance, but all our HVAC clamp meters from the Fieldpiece SC240 up to the Fieldpiece SC680 all perform this important HVAC test.

Fieldpiece SC200 Series
In this section, we're going to take a brief look at each of the Fieldpiece clamp meters on offer and discuss the features and how they relate to HVAC work. Fieldpiece clamps start with the SC220 and move up in numerical order to the new Fieldpiece SC680. As you've likely guessed, each higher numbered model increases in features and price, so you'll want to assess your needs and then make the best choice based on your specific job requirements. This short little guide will help. The Fieldpiece SC220 is the entry-level model with a variety of great features for HVAC. It works as a great backup meter, though you may want to invest a little more for your main meter. The SC220 reads AC/DC volts, AC current, microamps DC (for flame sensors in a furnace), resistance, and continuity. However, the SC220 is the only meter in the SC2xx series that reads microamps DC, so it's going to be your go-to for an inexpensive meter if your primary focus is heating work. Moving up the line to the SC240, we're going to add the ability to test capacitance (the importance of which we looked at above) and to test temperature. Now neither meter so far is TRMS. For most accurate results, you do want to get a TRMS meter, so enter the Fieldpiece SC260. This one is by far the most popular entry-level Fieldpiece clamp meter. The SC260 also adds a few convenience features like an LCD backlight and a magnetic hanger. Do remember that only the SC220 reads microamps, so for heating focused work, you'll want that or you'll want to make the jump the SC420.
Fieldpiece SC400 Series
The Fieldpiece SC420 is pretty similar to the SC220 but has some convenience features like a dual display, and most importantly, capacitance. It also will tell you duty cycle percentage and can read frequency using the clamp and leads. The SC420 is not TRMS and doesn't have a backlight, so it will be your go-to for a budget-friendly model if you do both AC and heating work. Clearly stated, if you want an excellent meter that is gentle on your wallet: SC220 for heating, SC420 for both heating and AC. Now, the Fieldpiece SC440 adds back in those convenience features like the LCD backlight and magnetic strap. Most importantly, it is a TRMS meter and reads Inrush current, as we discussed above. Those are the two primary advantages of picking up the SC440, and they are important ones. The Fieldpiece SC460 is a big jump up in features with a lot of smart-features for reporting and wireless app communication; however it relies on the JL2 joblink port and is being largely overtaken by the brand new Fieldpiece SC480, which connects directly to a smart device App. So let's take a look at the Fieldpiece SC480, the powerhouse choice in the SC4xx series. The SC480 reads everything discussed thus far plus it reads Power in kW, is TRMS and features a Low-Pass filter for accurate readings on variable frequency drives, checks 3 phase motor rotation, has Molex tipped leads for reaching into power connectors, and is safety rated to CAT IV-600V. Honestly, it blows the rest of the series out of the water and, most importantly for the modern job site, reports all this info back directly to a mobile app that can generate and print reports. Professionals working on mini-splits or even larger commercial units will want to consider this unit as the best investment in the series.
Fieldpiece SC600 Series
The Fieldpiece SC620 is the lowest price entry in this advanced series. This meter is the one to go for if you need higher-end convenience features like a swiveling clamp head for working in tight or awkward spaces, a magnetic strap, and on-board storage for all your leads. The SC620 essentially adds on these physical features to the measurement capabilities of the SC420 that we discussed above. You'll want the SC620 if you're on a budget but really want the extra physical features on this upper model Fieldpiece clamp meter. Do keep in mind that is does not have a backlight, inrush current measurement, or TRMS. The Fieldpiece SC640 is the way to go if you want to add in those three features I just mentioned. Fieldpiece likes to make clamp meters available to every price point, but if finances allow, between the two, you are better off with the SC640. That model was the top model offered by Fieldpiece until the introduction of the newest powerhouse meter, the SC680.
The Fieldpiece SC680 is the cream of the crop for HVAC/R clamp meters. SC680 connects wirelessly to the App for field reports that are shareable and printable. You'll be able to measure Power in kW, use Low-Pass filter variable frequency drives, and check 3 phase motor rotation. It also comes Molex tipped leads for power connectors and is also safety rated to CAT IV-600V.
Additionally, the SC680 HVAC clamp meter measures DC Amps for working with mini-split inverters, a dual temperature mode for measuring Delta T, and includes all the convenience features from the other Fieldpiece SC600 series meters, like a swivel clamp head and lead storage. The one really cool and unique feature on the SC680 that we've not seen in another HVAC clamp meter is a backlit dial. This feature allows you to work in dark areas and still see which measurement mode you've selected. Technically you could guess and check by viewing the backlit screen, but being able to see what you're doing while making your selections adds another layer to the ease-of-use factor. Overall, the Fieldpiece SC680 clamp meter is the pinnacle of the Fieldpiece catalog when it comes to HVAC clamps. This meter is the one to beat in today's market.
TOP
0 Items