The Superior AccuTrak VPE Pro-Plus Kit is a non-invasive cost-effective ultrasonic leak detector that can detect both pressure and vacuum leaks of any gas. The VPE Pro-Plus leak detector is the most comprehensive VPE Kit with all the accessories to easily and effectively pinpointing any kind of leak, troubleshoot internal mechanical problems, find bad gaskets, and door seals in any environment. Ultrasonic Leak detectors are extremely sensitive to the ultrasonic sound of a turbulent gas leak. Superior ultrasonic leak detectors use a technology called “heterodyning” which translates ultrasound to a lower frequency which your ears can interpret. The Accutrak Pro-Plus Ultrasonic Leak Detector maintains the original sound characteristics of the ultrasound making it possible to distinguish leaks from other competing background sounds. The Accutrak instruments are so sensitive you can actually hear the blink of an eye, yet most background noise will not interfere with detection accuracy. The Superior VPE Pro-Plus Ultrasonic leak detector includes a sound generator, upgraded noise cancelling headphones, a large carrying case, and a canvas belt pack. Listed below are the AccuTrak VPE Ultrasonic Leak Detector kits available and what is included in each one.

The AccuTrack VPE Pro-Plus Kit detects ultrasound – not refrigerant, or the presence of a specific gas. Any turbulent gas will generate ultrasound when it leaks, therefore it does not matter what gas you are leak testing. The Accutrak VPE ultrasonic air leak detector will detect air, nitrogen, compressed air, new or old refrigerants, or even air as it rushes into a system. It is a listening device not a “sniffer”. Therefore, the AccuTrack VPE can function in areas of heavy wind or concentrations of fumes from leaks which would make other detectors inoperable.
It is also more accurate than other types of detectors for detecting larger leaks because its sensor will not become saturated or give false alarms from the presence of gas in the atmosphere.
A leak is any unwanted flow of a substance out of a system, or in the case of a vacuum the unwanted flow into the system. This flow in or out of a system creates friction which generates an ultrasonic sound. The amount of turbulence present at a leak site is a function of the size of the orifice, the pressure behind the leak, the shape, or physical geometry of the orifice, as well as the type of pipe or container holding the gas. These factors will all determine how much ultrasonic sound will be produced by a given leak. It is quite possible for a smaller leak to create more turbulence (and sound) than a larger leak.
The sounds we can hear are less than a third of the total spectrum of frequencies generated. The sound in small leaks is mostly ultrasonic. Humans cannot hear this because it is above the human hearing range. The amount of sound pressure created by the leak will determine its ability to be detected ultrasonically. In order for a leak to generate ultrasound, the flow through the leak’s path must be turbulent.
The VPE ultrasonic sound detector receives the ultrasonic sound that escapes from a leak point, converts the sound down to the audible range where it can be heard in a headset, and viewed on the meter’s 10-element bar graph. The larger the leak, the higher the volume will be in the headset as well as a higher indication on the bar graph. This ultrasonic leak detector not only allows you to hear the leak, but also see the leak on the graph, helping to easily pinpoint the exact location of the leak. In addition, it also has a burst mode to make the output of the sound easier to identify for locations that have extremely noisy backgrounds.
The “Peak Hold” function on the leak detector can be toggled on or off by pressing the ON/OFF button. This function can be useful to better observe the maximum strength signals being detected, helping to locate leaks and faults.
The Accutrak VPE is capable of hearing leaks from over forty feet away, but it is best to hold the instrument as close to the test area as safely possible and check around fittings and piping using a zigzag motion, covering all suspected areas carefully.
The Superior AccuTrak Pro-Plus Leak Detector includes an upgrades industrial grade headset that eliminates all background noise, allowing a technician to effectively find the smallest leak, even in a very loud environment. A canvas belt pack is included in the Plus Pro Kit which features a semi rigid enclosure and a flexible bungee for quick and easy access to the AccuTrak VPE.
Ductwork
The Accutrak leak detector HVAC can be used to identify the sound of air leaking from a pressurized duct system which could be a significant source of energy loss.
Pneumatics and Hydraulics
Pneumatic systems (controls, hoses, tools, fittings) commonly have leaks which can be easily located with the VPE by finding the rushing sound given off from the leak.
Bearings, Valves, Steam Traps & Mechanical Systems
The VPE touch probe can be used to listen to the internal sounds of bearings, valves, and other mechanical systems to easily identify bad bearings, internal leaking valves, and bad steam traps.

The Accutrak “Burst Tone” Ultrasonic Sound Generator (SG-2) is included in the VPE Pro-Plus Kit. The Ultrasonic Sound Generator can be useful when locating leaks in enclosures, gaskets, and seals that are not under pressure. The AccuTrak Sound Generator is used to artificially “sound pressurize” an enclosure with ultrasound. This ultrasound is above the human hearing range and cannot be heard except through an ultrasonic leak detector. The ultrasound penetrates through tiny cracks, even ones not directly behind the leak point, enabling a technician to trace the path that air or water will take to cause a leak.
The Ultrasonic Sound Generator features a “burst mode,” which changes the generator's output from continuous tone to “Burst Mode.” If the background noise is extremely loud in a particular area, using Burst Tone will make the output of the sound generator easier to identify.
Applications for the SG-2 Sound Generator include:
The Touch Probe (included in all kits, but the basic)
Ultrasound not only travels through air but solid materials as well. The Accutrak VPE also includes a touch probe accessory that is used to detect sounds which are internally generated such as bad valve seats or steam traps. The touch probe can also be used to detect friction, lack of lubrication, and worn bearings in motors and gears.

The Accutrak VPE is available in different kits depending on your applications.

Proposition 65 Warning for California Residents: This product can expose you to chemicals including Benzene, which is known to the State of California to cause cancer and birth defects or other reproductive harm. For more information go to www.P65Warnings.ca.gov. 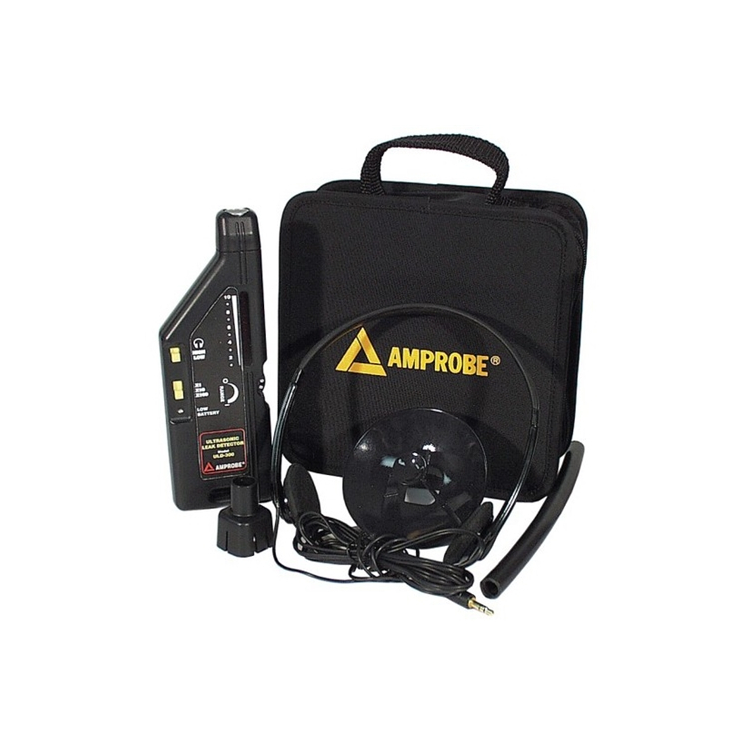 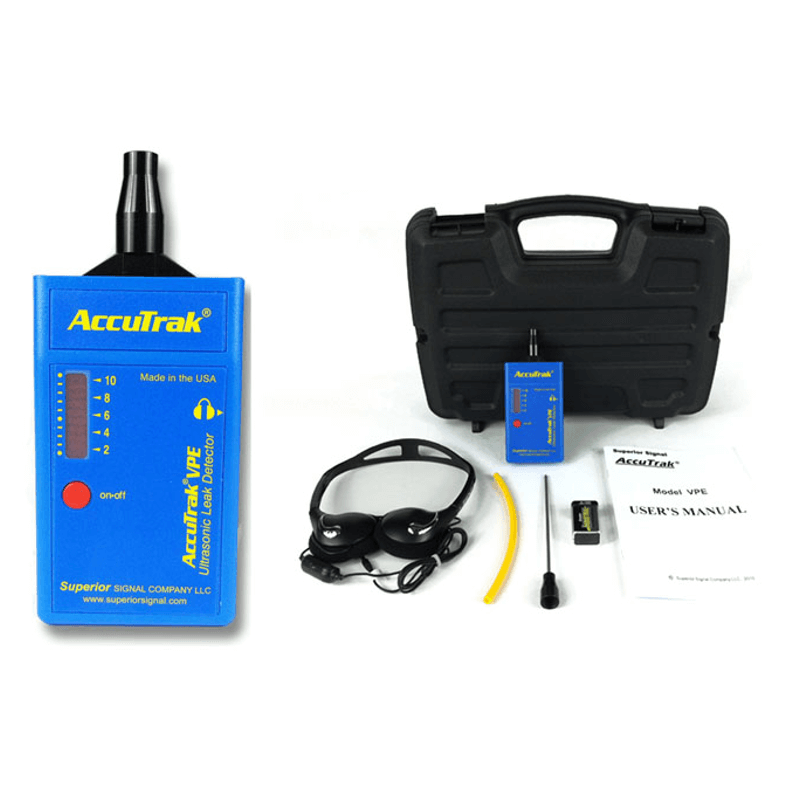 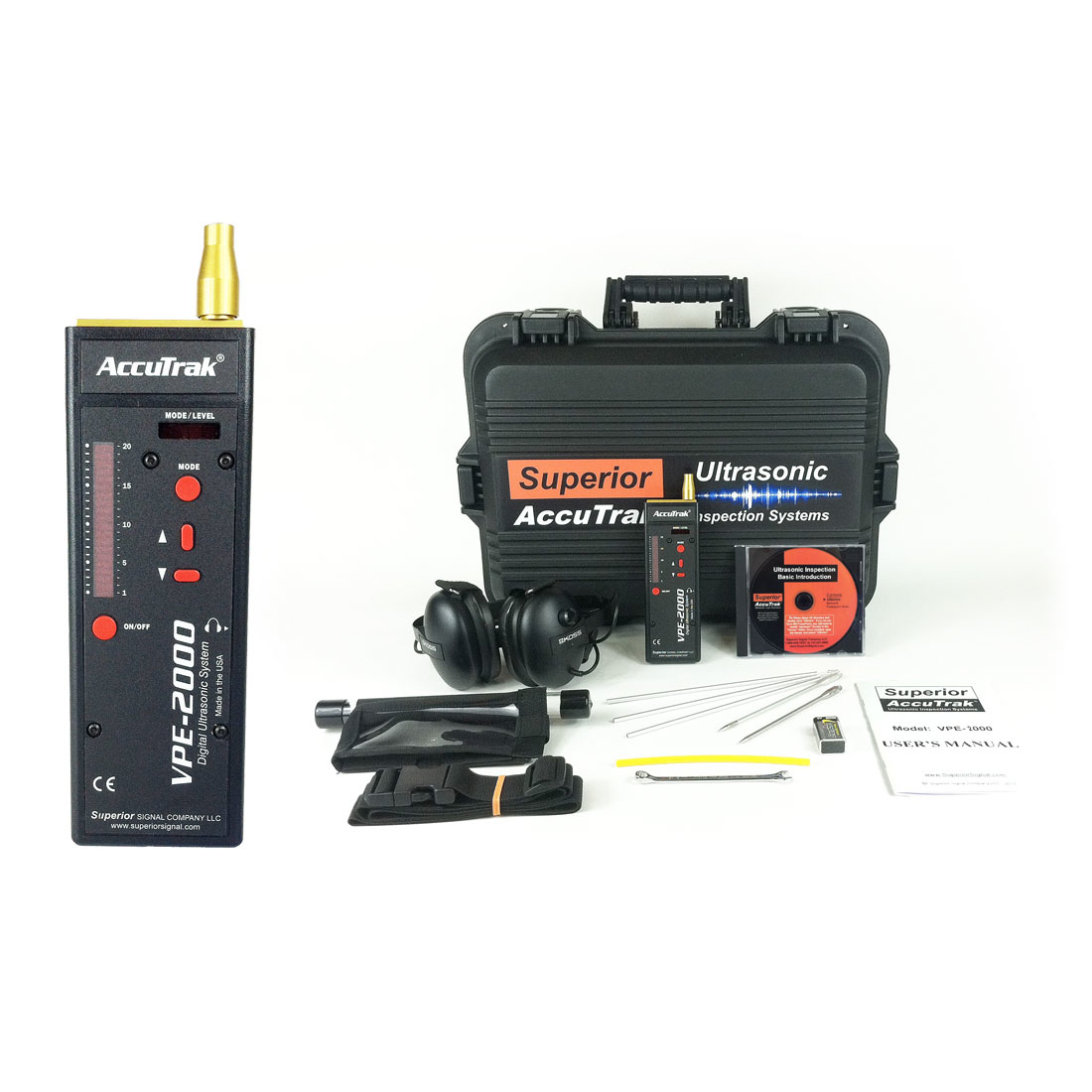